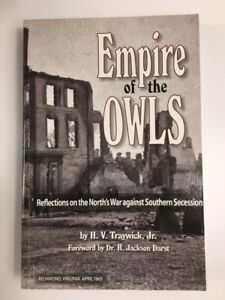 Empire of the Owls: Reflections on the North's War Against Southern Secession by H V Traywick

The Analysis of Owl Pellets. The Empire of the Eagle. Other titles from Oriolus Forlag. Zesty Owl Print.

Empire of the Owls: Reflections on the North's War against Southern Secession

The most expansive of the participants is the Greek-French philosopher Cornelius Castoriadis; the most provocative is the French-American literary critic George Steiner, who, among other things, wonders whether the death of Jesus Christ or of Socrates was more meaningful. Politics, too.

Castoriadis and the Italian scholar Guilia Sissa connect Greek tragedy to democracy, concerned as tragedy is with the clash of contradictory individual rights. More fanciful is the questionable notion, derived from Greek mythology, that Athens invented music. And although Marker enlists the glamorous movie actress Arielle Dombasle to credit Pythagoras with the discovery of mathematics, he backs off a bit to suggest that Greek math developed in a dialectical relationship to that of Egypt and Babylon.