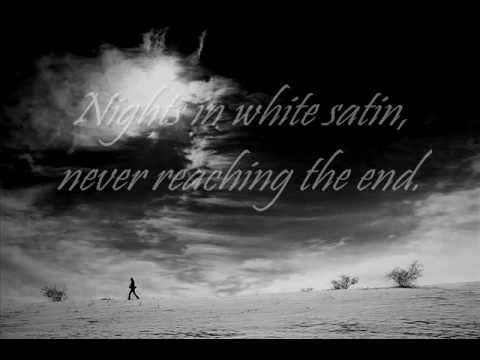 
The tricked-out, brightly painted vortex was all the more disorienting when approached with 3-D glasses.

Those who'd rather skip the spinning barrel could have taken the "Chicken Route," a hallway that bypassed the vortex. The loading area accommodated two vehicles at a time. Each vehicle had two benches and could handle up to six passengers. After the safety bar lowered and a ride-op cleared the vehicles, the trip began. The song, which was first released in and clocked in at nearly eight minutes, was re-recorded by the band.

It picked up at about the midway point of the original version. The signature flute and bass interludes were omitted. The onboard speakers were superb and provided a sonic underpinning for the heady atmosphere.

As Justin Hayward sang, "Nights in white satin, Never reaching the end, Letters I've written, Never meaning to send," ethereal 3-D specters in white satin, apparently greeted passengers. A bleak and barren landscape then slowly filled with bright colors. Sometimes the lyrics seem connected to the visuals and effects; mostly, however, the sights, sounds, and sensations washed over riders in a stream of altered consciousness.

Vivid Peter Max-style cubes and peace signs spun in midair; pulsating globules that appeared to have been hijacked from the light show of a circa Grateful Dead concert exploded and brought a rain of droplets onto passengers; blasts of air competed for attention with stylized renderings of free-spirited dancers. The Mellotron contained individual strips of tape with recordings of instruments playing each note. Depression of a key only allowed about 7 or 8 seconds worth of play before a spring would rewind the strip. So Pinder modified the instrument to repeat groups of strips available on both the right- and left-hand keys, to allow continuous play of the same notes, as long as needed.

I could arrange the strings, and play them, too.


It opened the door to arranging our songs and adding textures that developed our sound. The battle with recording a guitar band in Studio 1 was just getting the energy of the band to sound big and not diluted by the big room. The control room featured a channel, solid-state console built by Decca and installed in early A pair of reverb chambers were located on the roof, built during a expansion of the facility for stereo.

Adjacent to the control room was the cutting room, in which mastering engineer Trevor Fletcher could be found from to cutting lacquers and acetates for 7-inch singles for all the Decca labels. That vocal, recorded using a tube Neumann U67, was memorable for Hayward. It is my abiding memory of the session that day. DSS was meant to help explore and exploit the stereo picture image, Dacre-Barclay says, providing the Decca engineers a specific prescription for tracking.

I reckon we can get away with eight. The band members were encouraged to write four additional day-themed songs, which were recorded over the course of the following week, rough mixes of which were provided to Knight to work up his arrangements. Varnals had worked with Knight on a similar recording in , on a project by Edmund Hockridge. We were very lucky. I suppose I got a bit of experience in playing that sort of beat. To recoup their money, the Decca brass tapped the Moody Blues to help with a promotional venture helmed by composer, arranger and conductor Peter Knight.

Hayward: The original idea [for the album] was by a man named Michael Dacre-Barclay, who was head of special products for Decca. Ultimately, I think it was to sell their stereos. They had a whole series of albums they wanted made to demonstrate the extremes of music. So there was a marching band, a big brass band, and stuff like that. Peter Knight had a lot to do with reversing the idea. Edge: We persuaded Peter Knight [against it]. We had nothing to lose but he had a lot to lose. Still, he went with it.


That was a beautiful song. Those were the markers of two points in a day. They were the markers of the day in the life of the everyman, which was interesting. Edge: Back in those days there used to be two or three acts on a live show, and you had half an hour each. Basically that was the origin of the idea of Days of Future Passed.

Pinder: It just kind of fell together that the album would have a continuity of theme. Everybody then took a time of the day and consciously wrote something that evoked the feelings, events, beauty and symbolism of the segments of a day. Edge: We had a problem as we were writing the songs. Pinder: Tony Clarke was always full of ideas. We called him the sixth Moody. He played bass and had a musical background, which allowed him to soar with us in the studio.

Tony was a great producer and a great friend. It was decided that Pinder, with his dignified baritone, would recite the prose on record — which he did while laying flat on his back in the studio. Pinder: No doubt I was relaxing and in a meditative state when that was recorded. It needed a focus and concentration to deliver the message of that poem, poignantly written by Graeme. Edge: At the time Mike had a much more gravely kind of voice. Cigarettes and whiskey had modulated his chords a bit more than mine. Despite the lofty sounding name, no such group actually existed.

In reality this was the banner for a group of anonymous session musicians under the stewardship of Peter Knight, who also scored the lush instrumental links. Hayward: I went to the orchestral date for it. It was a three-hour session with one run through. They all knew Peter Knight well.

They were ready for it. Then they had a tea break and did the recording. They were that good! And that was it — done. Then on the Sunday night we were all invited back and listened to it in the studio: me and Graeme with our girlfriends, the rest of the group, and maybe a roadie.

There were some big Tannoy speakers that they had in studio. It was lovely. When it first came out it was to demonstrate the Deramic Sound System. In an era when AM radio ruled the airwaves, the original version of the song was chopped to just over three minutes to meet the quasi-mandatory time constraints. A slightly longer edit initially peaked at Number 19 on the English charts, but then it never truly died away. He was a lovely elderly gentleman and would come along and get a bit [of a] contact high from my joints.

He particularly liked it. Maybe they thought people had very short attention spans. Pinder: The Sixties and Seventies were very unique for the artist as well as for the listener. I think the fans in those days were just as creatively turned on by the evolution of our music and our message as we were turned on by creating it.